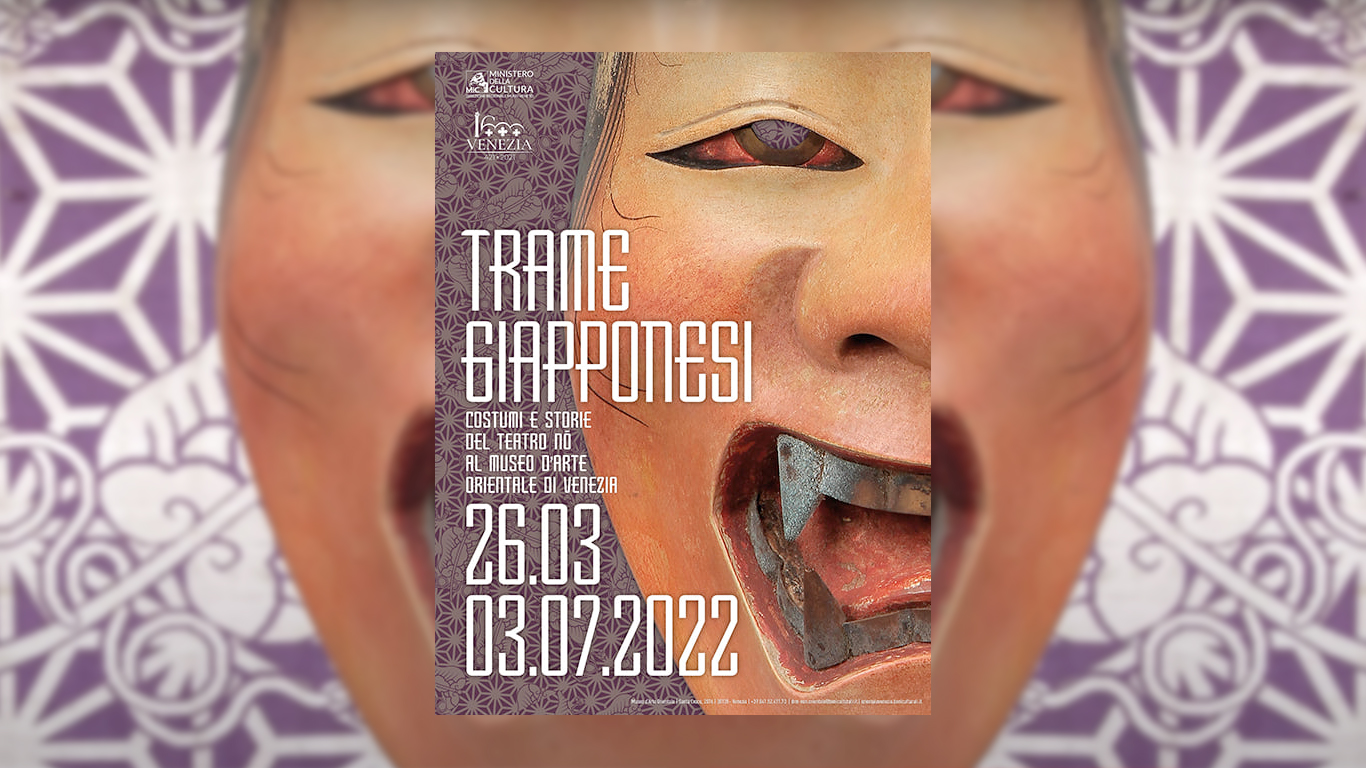 As part of the Venice 1600 program, to celebrate sixteen centuries since the mythical founding of the city, the Museum of Oriental Art in Venice announces the exhibition JAPANESE TALES. Costumes and Stories from Nō Theatre at the Museum of Oriental Art, curated by the Museum’s director Marta Boscolo Marchi. From March 26 to July 3, 2022, the exhibition spaces on the third floor of Ca’ Pesaro will host paintings, prints, photos, documents, costumes, musical instruments and masks related to the Nō theatre, one of the most famous Japanese theatrical forms, which made its very first appearance in Europe thanks to the 13th International Theatre Festival of the Venice Biennale in 1954. Most of the items and works on display are part of the heritage of the museum, which mostly consists of Prince Henry of Bourbon-Parma's collection. In addition to these there are loans from private collections as well as a series of unpublished photographs by Fabio Massimo Fioravanti, who has been researching the Nō theatre since 1989. The exhibition has been realized with the collaboration of scholars from Italian and international universities composing the scientific committee: Monique Arnaud, Marta Boscolo Marchi, Matteo Casari, Andrea Giolai, Diego Pellecchia, Bonaventura Ruperti and Silvia Vesco. Inaugurated in 1928, the first Italian State Museum to exhibit Asian art, the Museum of Oriental Art in Venice houses Prince Henry of Bourbon-Parma's considerable collection, which became part of the public patrimony in 1925, and has since been displayed on the top floor of Ca' Pesaro. Among the works and artefacts in this collection, the Japanese ones from the Edo period (1603 - 1868) stand out - in number and quality - as the most significant in terms of development of Japanese art. The costumes and works on display are also part of this period: paintings, prints and screens show the diffusion of those stories, drawn from poems, legends and tales of the past, which inspired both theatrical texts and iconographies. The middle section of the exhibition – the richest – will be dedicated to stage costumes purchased by Prince Henry during his long journey around the world between 1887 and 1889, now kept in the museum's storage and never exhibited to the public all together until now. In the Nō theatre, the stage costumes focus the public's attention and reveal the nature, age and social class of the characters. The mask also plays a fundamental role - to accompany the costumes. Some of the masks exhibited will be from the collection of Renzo Freschi in Milan. The musical accompaniment of the Nō is traditionally entrusted to the hayashi, the ensemble that accompanies the singing and acting, the entry and exit of the actors, the dance, and consists of one wind instrument (flute, fue or nōkan) and three percussion instruments: kotsuzumi, ōtsuzumi and taiko. All the hayashi instruments belonging to the Museum collection will be presented in a dedicated section. The contemporary staging of the dramas will be evoked through the photographic documentation of Fabio Massimo Fioravanti, who has been carrying out work on the Nō theater since 1989. Eighteen unpublished images have been selected from his archive to capture some salient moments of the representation and measured gestures of the actors, not only on the stage but also behind the scenes - in the mirror room called kagami no ma - or along the bridge that leads from this to the scene. In addition to the photos is the docufilm The Flight of the Heron, by Giuliano Cammarata and Alessio Nicastro, dedicated to the work of the master Udaka Michishige. Finally, a special section will retrace the arrival of the Nō theatre in Europe in1954 which was through a series of shows held in Venice. In fact, that year the city celebrated the 700th anniversary of the birth of Marco Polo and on the occasion of the 13th International Theatre Festival of the Venice Biennale a group of actors from the Kanze and Kita schools marked the history of the performing arts by performing at the Teatro Verde on the Island of San Giorgio between August 6 and 7, 1954. Through the images and documents preserved in the Historical Archive of the Venice Biennale, it will be possible to reconstruct the phases of this very important exchange between Venice and Japan. JAPANESE TALES. Costumes and Stories from Nō Theatre at the Museum of Oriental Art, promoted and sustained by Direzione regionale Musei Veneto of the Italian Ministry of Culture, avails itself of the patronage of the General Consulate of Japan in Milan, the Fondazione Italia Giappone (Italy-Japan Foundation), the Istituto Giapponese di Cultura in Roma (Japan Foundation in Rome) and the International Noh Institute, and will be documented through a catalogue published by Grafiche Antiga, realized thanks to the support of the Comitato Giapponese Venezia aVvenire, as part of the initiatives of the Association of International Private Committees for the Safeguarding of Venice.   *********** JAPANESE TALES Costumes and stories of Nō Theatre at the Museum of Oriental Art curated by Marta Boscolo Marchi March 26 – July 3, 2022 Oriental Art of Venice Ca’ Pesaro – Santa Croce, 2076 Venice w. orientalevenezia.beniculturali.it i. @museorientalevenezia f. @MAOVenezia t: @museorientaleVe Press Office Giovanni Maria Sgrignuoli e. giovanni@gmspress.com / t. +39 328 9686390