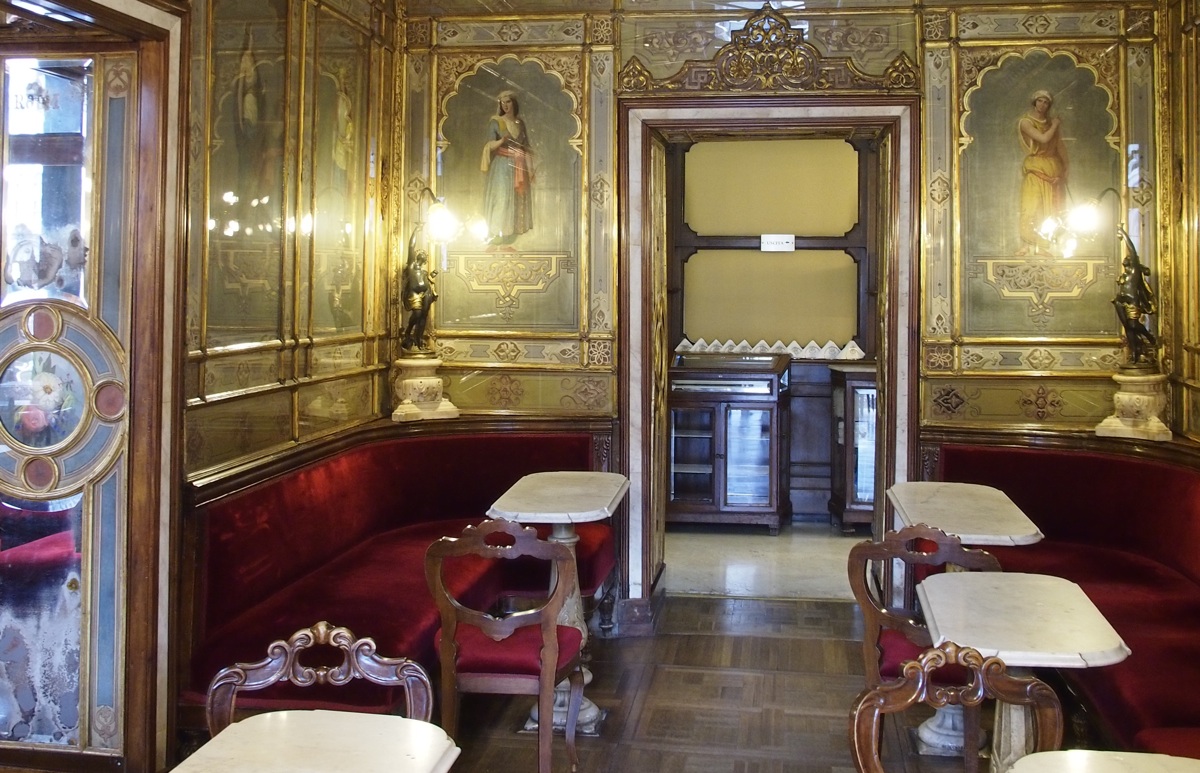 It is regarded as one of the most ancient cafés in Italy and also due to its prestigious position, just under the arcade of Procuratie Nuove in St. Mark Square, it is almost a symbol of Venice. It was inaugurated in 1720 by Floriano Francescani with the name of ‘Alla Veneziana Trionfante’ but it soon began to be called Florian by its prestigious customers. Three hundred years of history have passed through its rooms and in front of its windows, from the fall of the Serenissima Republic to the conspiracies of those who wanted to subvert the French and later Austrian regime, from the Unity of Italy to the world Wars. The Venetian noblemen and politicians, such as Daniele Manin and Silvio Pellico, used to sit there to discuss state affairs, men of letters and artists, such as Carlo Goldoni, used to seek inspiration, unrepentant ladies’ men, such as Giacomo Casanova, used to entertain ladies (Café Florian was the place which first allowed women to enter too). It was the place right for gossip and frivolous talks, so that Gaspare Gozzi decided that it had to be one of the few places where people could buy his Gazzetta Veneta. During the nineteenth century Lord Byron, Foscolo, Goethe, Marcel Proust, Gabriele D’Annunzio, Rousseau, Stravinsky, Modigliani used to sit at its tables. Riccardo Selvatico and his friends decided just at Café Florian to organize an exhibition of biennal art: the International Modern Art Exhibition, namely, the Biennale of Venice, which was inaugurated in 1895.

Nowadays Café Florian, which from the beginning of the twentieth century devised the traditional idea of a café concerto with a permanent orchestra, is still the place where Venice and the world come to meet and where you could sit close to some renewed characters and cinema stars. Among other things it offers a wide range of unique products too, such as different kinds of coffees and teas, room fragrances, accessories as silk scarves and ties which you can buy also on its extremely refined web site on the Internet.

“I took a seat at the Caffè Florian, savouring the ices, listening the music, chatting with an acquaintances. No traveller can forget the immense mass of tables and chairs wich advances like a promontory into the smooth lake of the square” Henry James 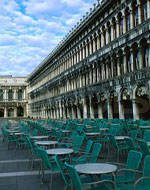 It rose in 1775 with its original name ‘Il Rimedio’ by will of Giorgio Quadri, an eastern inhabitant of Corfù; it rapidly stood out among the several cafés in the Square, which at that time were about 34.

In 1830 the café was taken over by the Vivarini brothers who gave it a great impulse by opening new rooms on the upper floor. The elegant and refined place adorned with the wonderful stuccoes and the valuable pictures by Giuseppe Ponga, as well as its position in the Square have, since ancient times, exercised an incredible fascination on renewed characters. In fact, by leafing backwards through the pages of the Guest Book of the Café Quadri you can find Stendhal, who was a regular customer, Lord Byron who, as lover of dissoluteness, was always searching for female companies sitting for more than three years almost in all the cafés of the Square. Honoré De Balzac visited the Quadri in 1837 and Richard Wagner, the great German composer, used to sip a coffee there at eleven o’clock.

It is along the Zattere or Rafts both the Café and the homonym pension witnessed the drafting of the very famous ‘The stones of Venice’ by John Ruskin. The Café La Calcina – which later became Vapore e Cucciolo – was the meeting place of dissolute artists such as Francesco Maria Piave, namely the librettist of Verdi: the poet Marie de Regnier, loved by D’Annunzio, of whom there is a picture dating 1909, in which she is with the writer Jean-Louis Vaudoyer. In 1912, just at the tables of the Café, Rainer Maria Rilke wrote a letter entitled ‘Bridge Calcina Zattere 775’and addressed to Princess Thurn und Taxis. Nowadays the name of the Café is La Piscina, reminding an authentic piece of Venice: in fact just here up to the Sixties there was a seaside resort with a swimming pool (in those days the lagoon water was not so dirty as today!), a delimited space where people could amuse themselves.