The Feast of Sensa 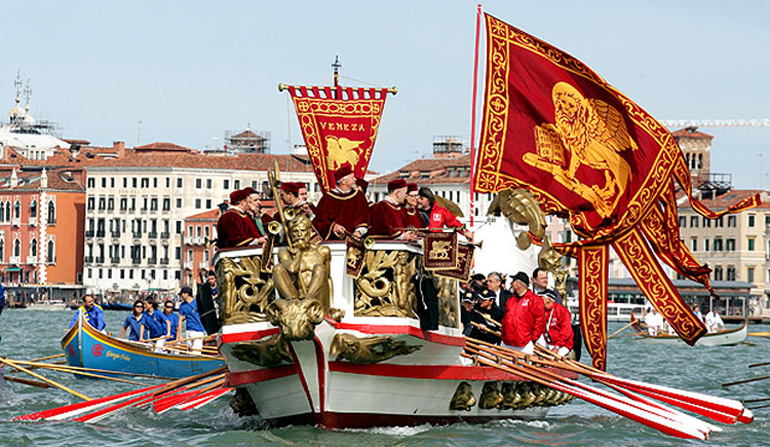 The Feast of Sensa

The Feast of Sensa takes place in Venice every year on the Ascension day in May and has got very ancient origins. Its aim is the commemoration of two Venetian victories which actually occurred some centuries the one from the other.

The first victory dates back to the year 1000 when Doge Pietro Orseolo II decided to leave, just on the Ascension day, in order to defend the towns in Dalmazia, which, for some years, had asked for help to Venice against the continuous invasions of pirates from Croatia and Narentani. Defeated the enemies, the Adriatic Sea became free and safer for the Venetians. For this reason the Town Council decided that every year, on the Ascension day, (in Venetian language the day of the ‘Sensa’), such event had to be celebrated. Nonetheless it was still a plain and modest ceremony. What gave a new glamour and solemnity to this feast was a later event and precisely a diplomatic victory: in 1177 Doge Sebastiano Ziani welcomed the most important authorities of that time, namely Pope Alexander III and Emperor Federico Barbarossa,in St. Mark Basilica and succeeded in making them sign a peace treaty. The Pope, as a return for such favours, entrusted the rule over the sea to Venice by means of the solemn yearly ‘Wedding ceremony’ during the Feast of Sensa. On the occasion, every year, the Doge, on the Bucintoro, used to reach St. Elena off St. Pietro di Castello. There the Bishop, on a boat with golden borders, was waiting for him, ready to bless him. In order to evidence the rule of the Serenissima over the sea, the Feast would have had to end with a sort of propitiatory ceremony: the Doge, once he had reached the port inlet, had to throw a gold ring into the sea.

This Feast of Sensa is currently celebrated even if, we must confess, decidedly with less glamour. Anyway, still nowadays, the Mayor of the town, on the Ascension day, reaches, on a small Bucintoro used during the Historical Boat-race, the port inlet and gets ahead with the tradition, along with the Venetian rowing Associations, by throwing the gold ring representing the union of Venice with the Sea.