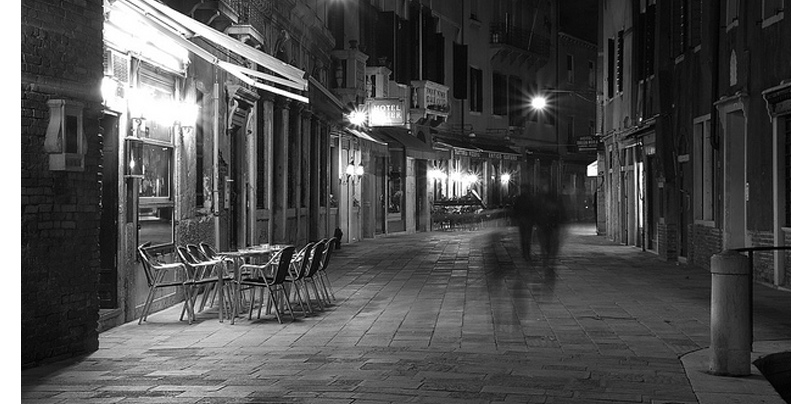 Many people can imagine that Venice, the city of love and magic, of uncontrolled amusement and deep absorption, is also a place inhabited by spirits. As a matter of fact there are lots of stories of ghosts wandering around the Venetian narrow streets, keeping faithful to tradition which wants the spirit of a dead person as related to a specific place for ever.

It happens, thus, that in Bressana Court at SS. Giovanni and Paolo, every night you may run into the skeleton of one of the last bell-ringers of St. Marc. After selling his bones to a scientist, out of greed, such man is condemned to wander, after midnight, begging for alms among passers-by, in order to buy himself again.

Another skeleton is in Cannaregio, in Campo de l’abazia. There, the old usurer Bartolomeo Zenni is condemned to transform himself into a burning skeleton, because of his meanness.

The same destiny is for the spirit of a little girl, Giuseppina Gabriel Carmelo, who drowned in 1904 because of a collision, in the fog, between a steamer and the gondola on which she was voyaging. The accident happened in the lagoon off St. Michele in Island, namely Venice cemetery and during the foggy nights you can make out a small floating coffin with four burning candles on its cover. That is Giuseppina who shows herself, in order to avoid ferrymen to collide with her again.

An accursed place par excellence is, anyway, Ca’ Dario, namely an elegant small palace on the Canal Grande. All the Venetians know that its owners, if do not die a violent death, sooner or later will be ruined: what keeps alive such rumour is an impressive sequence of losses ad failures occurred from the Sixteenth century till nowadays.

Going back to spirits, in campo St. Piero, Castello, the ghost of young Tosca wanders dressed up as a bride, looking for a finger of hers having the ring, which, in past times, was cut off. Just in such a way she will be able to celebrate her wedding.

For more about spirits in Venice download ou Guide of Venice