The origins of the glass art in Murano – Venice go back to the century preceding the millenary. Some excavations have brought to light some pieces proving the presence of such activity already in the seventh century, both on Torcello island and in Murano one. But it was during the twelfth century that the glass art became an organized manufacturing activity. In that period such craft concentrated in Murano island, till the moment when the Republic decreed the transfer of all the still working furnaces of the historical centre to the island, because of security reasons related particularly to the risk of fire. We can assume that then the techniques were refined in Venice more than elsewhere in Europe thanks to the trade relationships that the Venetians had with the Near East and above all with the countries of ancient glass tradition, such as Fenix, Syrians and Egyptians. 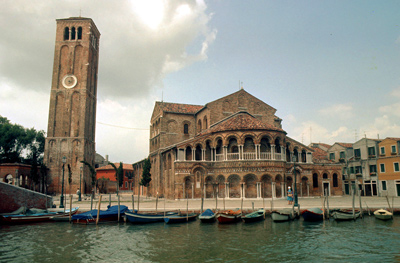 The ancient Amurianum, that was the name of the island in ancient times, increased its glamour so it was no longer considered one of the islands of Venice, but it could enjoy a certain independence as for the Seigniory. Such privilege was given to the island for the activity of the furnaces which had settled there and in consequence of that for the economical importance that Murano began to acquire in the social tissue of the Serenissima.

The affinity between Venice and Murano is curiously proved also by the morphology of the two ‘towns’, which have got the same campi, narrow streets and internal water ways and even the Canal Grande which crosses them. The glassware craft was safeguarded by means of sanctions which forbade to carry out such activity to those who were not registered as craftsmen and to those wanted to move abroad

The kind of production was above all of utilitarian and in series, as for instance the bottles for wine and oil, glasses, lamps and so on. Also many decorative objects endowed with religious images were produced. During the centuries the manufacturing of glass became one of the main activities of the Republic. In particular in the Fourteens there was a significant development of this art, particularly due to the passage to the transparent white glass which looked like crystal.

Angelo Barovier, namely one of the greatest glass masters, ideated the proceeding for obtaining this kind of glass, which supplied Venice with the artistic prevalence for more than two hundred years and made it possible to extend the production to more precious objects too. During the sixteenth century the glassworks activity underwent a critical moment. The main cause was the increase of the glass masters’ emigration and the discover of a new type of crystal glass with lead and of a crystal glass with potassium having a high lime content, all that occurred in Boemia and 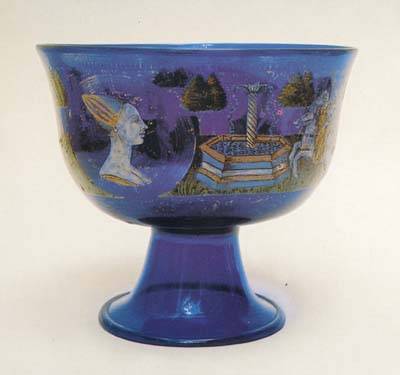 In 1861 the Archaeological Glass Museum was founded, thanks to the work of three people: the Mayor Antonio Colleoni, abbot Vincenzo Zanetti and lawyer Antonio Salviati. However things in Europe were still changing, both as far as production and tastes and artistic trendsare concerned. Murano secluded itself and the youth, confident of being the most capable from a technical point of view did not care about dealing with the new, which expresses itself by means of forms related to all the arts, and consequently glass too.

There were, obviously, some exceptions which regarded brothers Toso and the artists Barovier.

In 1921 there was another moment of revival.

Giacomo Cappellin with young Paolo Venini took on the glasswork of Andrea Rioda and founded the company named ‘Blowned glassware from Murano Cappellin, Venini and C.’. They chose to deal with a refined kind of production, but at the same time, a production which could be used in everyday life.