Doge’s Palace and Prisons through the Bridge of Sighs 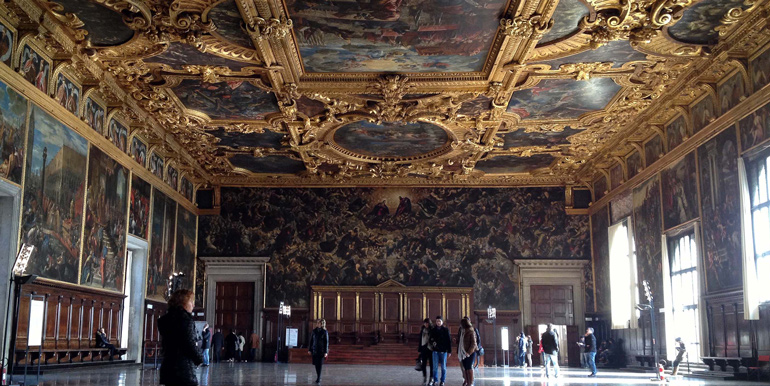 Doge’s Palace and Prisons through the Bridge of Sighs

In this Tour you will have the opportunity to enter inside the Doge’s Palace, the highest achievement of Gothic architecture in Venice, through the  Porta del Frumento (Corn Door) on the waterfront. The monumental complex, which overlooks St.Mark’s Square, was the symbol and center of the political and administrative life of the Serenissima.

The structure is made up of three large blocks, incorporating previous constructions. The wing towards the St. Mark’s Basin is the oldest, rebuilt from 1340 onwards. The wing towards St. Mark’s Square was built in its present form from 1424 onwards. The canal-side wing, housing the Doge’s apartments and many government offices, dates from the Renaissance and was built between 1483 and 1565.

At once the Doge’s residence, seat of government and court of justice and prisons, the Palace was for centuries the symbol of the wealth and power of the Venetian Republic.

•  Enter the Doge’s Palace and the inner courtyard surrounded by the four monumental facades. Ascend to the first floor through the spectacular Giant’s Staircase flanked by the huge marble statues of Mars and Neptune by Jacopo Sansovino

•  See the impressive halls and the magnificent Sala del Maggior Consiglio, the hall where the Major Council met, and where you can admire the masterpieces of Paolo Veronese, Tintoretto e Jacopo Palma il Giovane.

Entrance fee to the Doge’s Palace for immediate access.