Sabine Weiss. The poetry of the instant 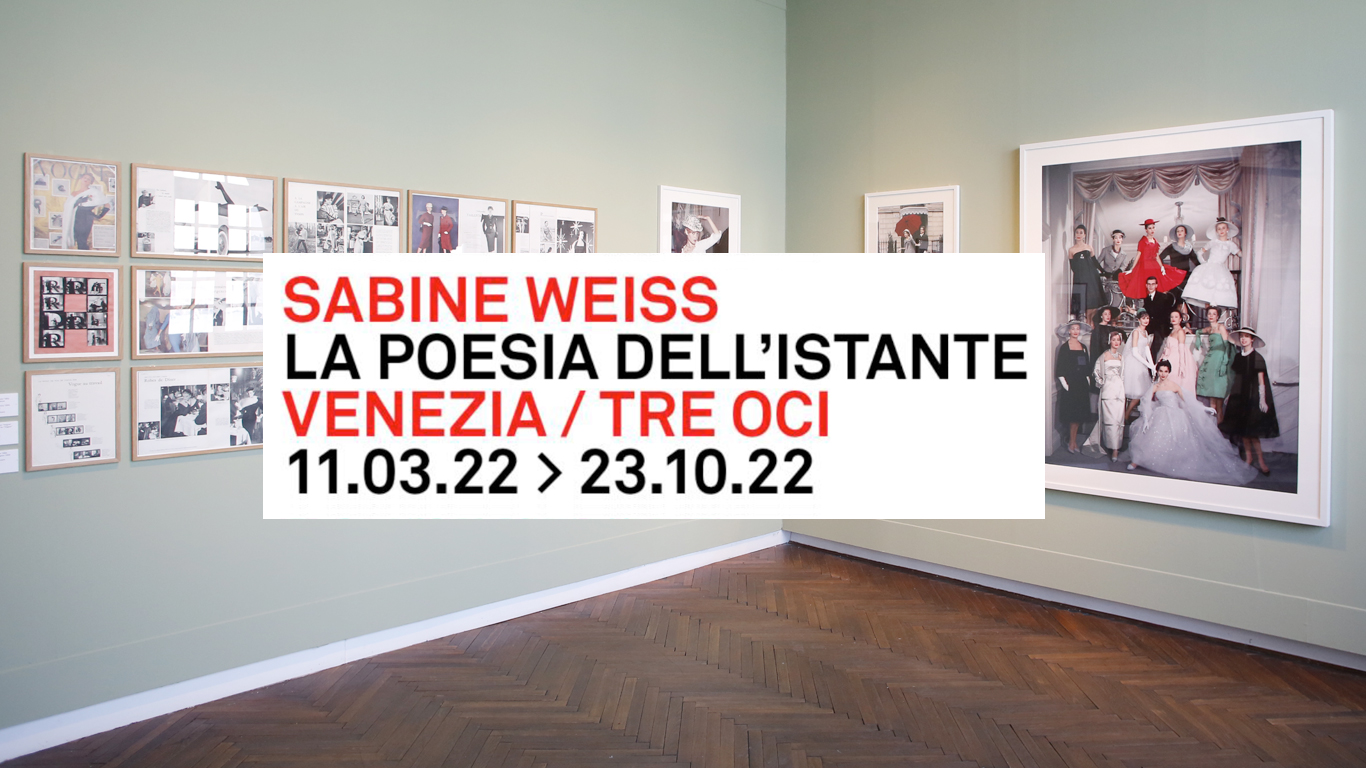 Sabine Weiss. The poetry of the instant

The Casa dei Tre Oci in Venice presents, from March 11 to October 23, 2022, the largest retrospective ever held – and the first in Italy - dedicated to the Franco-Swiss photographer Sabine Weiss, who passed away at the age of 97 at her home in Paris on 28 December 2021, one of the greatest representatives of French humanist photography along with Robert Doisneau, Willy Ronis, Edouard Boubat, Brassaï, and Izis.

The exhibition is the first and most important international tribute to her career, with over 200 photographs. Curated by Virginie Chardin, the retrospective is sponsored by the Fondazione di Venezia, realized by Marsilio Arte in collaboration with the Berggruen Institute, and produced by the Sabine Weiss atelier - Laure Delloye-Augustins, with the support of the Jeu de Paume and the International Festival Les Rencontres de la photographie d'Arles, under the high patronate of the Swisserland Consulate general in Milan.

The only woman photographer of the postwar era to have practiced this profession for such a long time and in every photographic genre - from reportage, artists' portraits, and fashion to ‘street’ photography, with particular attention to children's faces and her extensive travels around the world, Sabine Weiss, who was able to actively participate in the construction of this exhibition, had opened her personal archives in Paris to tell her extraordinary story and present her work in a comprehensive and structured way.

The shots exhibited at the Tre Oci retrace, along with various publications and magazines of the time, Weiss's entire career, from her beginnings in 1935 to the 2000s. From the outset, as the photographs of children and passersby in the exhibition testify, Weiss directed her lens on bodies and gestures, immortalizing emotions and feelings, in the spirit of French humanist photography, an approach from which she would never deviate, as can be seen from her words: "To be powerful, a photograph must speak to us about an aspect of the human condition, make us feel the emotion that the photographer felt in the presence of her subject".

Born Sabine Weber in Saint-Gingolph, Switzerland, on 23 July 1924, later taking the surname of her husband, the American painter Hugh Weiss (Philadelphia, 1925 - Paris, 2007), she approached photography at an early age. She completed her apprenticeship with the Boissonnas, a dynasty of photographers who had been working in Geneva since the end of the 19th century. In 1946, she left Geneva for Paris and became the assistant of Willy Maywald, a German photographer specializing in fashion and portraits. When she married Hugh in 1950, she embarked on a career as an independent photographer. Together, they moved into a small Parisian studio and frequented the postwar art milieu.

One of the core groups of works in the exhibition Sabine Weiss. The Poetry of the Instant tells the story of the 1950s, the period in which the photographer gained international recognition. In 1952, her career took a decisive turn when she joined the Rapho agency on the recommendation of Robert Doisneau. From 1953 onwards, her photographs were published by major international dailies and magazines including Picture Post, Paris Match, Vogue, Le Ore, The New York Times, Life, and Newsweek. In that same year, Weiss participated in the exhibition Post War European Photography at the Museum of Modern Art in New York (MoMA), and in 1954 the Art Institute of Chicago dedicated an important solo exhibition to her work. In 1955 Edward Steichen chose three of her shots for the historic anthological exhibition The Family of Man at the MoMA.

From 1952 to 1961, Weiss collaborated with photographers such as William Klein, Henry Clarke, and Guy Bourdin, producing some memorable fashion shoots for Vogue, from which the exhibition displays several vivid color prints along with 15 original issues of the legendary magazine.

A section of the exhibition is dedicated to her portraits of painters, sculptors, actors, and musicians. For five years, Hugh Weiss mentored the artist Niki de Saint Phalle, whereas Sabine was close to Annette Giacometti, wife of the great sculptor Alberto. The exhibition features their portraits alongside those of other personalities such as Robert Rauschenberg, Andrè Breton, Anna Karina, Françoise Sagan, Romy Schneider, Ella Fitzgerald, Simone Signoret, and Brigitte Bardot.

A trip to America in 1955 aboard the ocean liner Liberté in the company of her husband Hugh made a strong impression on her, and the shots taken in the streets of New York, teeming with details, from the Bronx and Harlem to Chinatown and Ninth Avenue, were published in The New York Times in a major spread entitled "A Parisienne’s New Yorkers”. The images tell the story of America from a French point of view, with a marked sense of humor, many of which are exhibited for the first time in Italy, on the occasion of the retrospective at the Tre Oci.

The exhibition also reserves ample space for works created in the 1980s and 1990’s, when the artist was in her sixties and seventies, during her travels to Réunion, Portugal, India, Myanmar, Bulgaria, Japan, Poland and Egypt. As the curator VirginieChardin observes, "What strikes the viewer is the sense of isolation and sometimes the tender sadness that emanate from these later photos, where children and old people resemble each other in their shared fragility. A melancholy and sometimes darkly somber quality emerges from these images, contrasting with the photographer’s lively, playful personality, over which time seems to have no hold.".

In addition to photographs, the exhibition will also feature extracts from documentary films dedicated to Weiss (La Chambre Noire by Claude Fayard, 1965; Sabine Weiss by Jean-Pierre Franey, 2005; My work as a photographer, by StéphanieGrosjean, 2014) in which the photographer recounts, in different periods of her life, her artistic journey, her travel experiences, and the difficulty of being a female photographer. The strength of her curiosity for the world and her joy of seeing and documenting it make Sabine Weiss a symbol of courage and freedom for all women photographers.

The catalogue, published by Marsilio Arte, includes many previously unpublished images, along with texts by Virginie Chardin, curator of the exhibition, and Denis Curti, artistic director of the Casa dei Tre Oci.

Open every day from 11am to 7pm, except Tuesdays.