The Piave river and the Great War 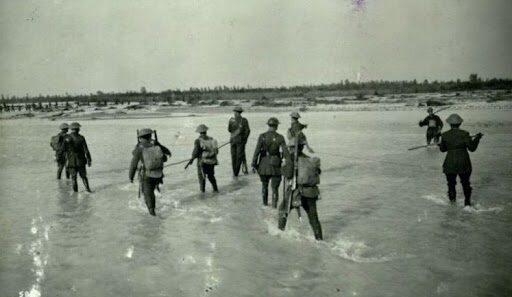 The Piave river and the Great War

Today the Piave flows slowly in its bed of gravel and stones smoothed by the water, interrupted by islets and green spots, inextricably linked to the memory of the Great War, to the bridges of boats, to the hidden positions, to the battles that so badly marked these places. The “river sacred to the Fatherland” became, after Caporetto, the last bastion of Italian defense and the front that marked the decisive victory in the historic battle of Vittorio Veneto. This territory still preserves numerous testimonies of the bloody clashes that were fought there: monuments, shrines, paths of high historical and symbolic value. An open-air museum is the itinerary “The Great War from Ponte a Ponte”, along the Piave da Vidor front to Susegana. In Moriago della Battaglia is the Isola dei Morti, a monumental park surrounded by greenery, in memory of the Arditi who succeeded in breaking through the Austrian lines in October 1918. Some paths reach the Piave riverbed, very suggestive at this point. Interesting is also the Museum of the Great War of Fontigo that collects numerous finds found in the area or donated by the population. Near the Piave, the castles of Collalto and San Salvatore in Susegana were badly damaged under the artillery target. On the hills there were trenches, shelters and tunnels dug into the rock partly still visible, such as the hospital cave at Colfosco. Not far away, Borgo Malanotte in Tezze di Piave is the place where the fate of the offensive action of British troops was played out. The British Cemetery still remembers the sacrifice of the young English soldiers. In memory of the fallen in the many wars is also the suggestive Wood of Penne Mozze in Cison di Valmarino. Not far away, you can take the “Road of 100 Days”, the last stretch of the San Boldo Pass. Built in very short times in 1918 by the Austrian forces, it connects the valley of Treviso to that of Belluno and represents an engineering masterpiece, with five almost overlapping galleries carved on steep walls. A Combai is the “Strada de la fan”, a historical and naturalistic itinerary, whose name is linked to the hardships suffered by the elderly, women and children who, under the orders of the Austrians, built it for the transport of cannons.