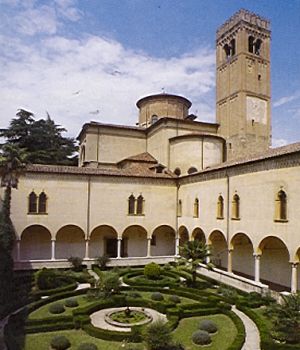 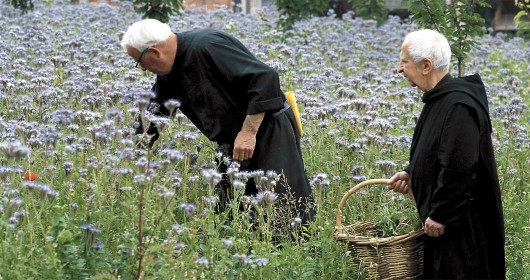 Considered one of the oldest abbeys in Veneto, Praglia Abbey was built between the eleventh and twelfth century, over a large expanse of meadows, from which it derived, in fact, his name. Between the fifteenth and sixteenth century, the church and the monastery took the current monumental form and was accomplished the work of pictorial embellishment. At the end of the Venetian Republic had to suffer the Napoleonic invasions, accusing many tampering to its artistic properties and ending abolished in 1810. The monastic community finally took possession of the Abbey in 1904, after buying at auction a part of the old complex. From Praglia had left the communities that restored the monasteries of Santa Giustina and San Giorgio Maggiore in Venice. The monumental complex of the Abbey of Praglia remained intact and deserves a thorough visit to the numerous cloisters (there are 4), the Monumental Refectory containing the great Crucifixion of B.Montagna, and the Chapter House. The vastness of the building (approximately 13,000 square meters of covered area), the harmonic balance and rationality of the four cloisters articulating the space, the architectural style that combine happily the late Gothic and the incipient Renaissance, make Abbey of Praglia a remarkable monument of art. Today Praglia Abbey is an important centre of spirituality and culture, home of a National Library, a prestigious laboratory of restoration of old books, a convention centre, a guest house, a delicious herbalist's shop and a sale of several products produced by the monks. OPENING HOURS AND TOURS: Sunday and Public Holidays: Hours : 14.30; 15.00; 15.30; 16.00; 16,30 Summer timetable: 15.30; 16.00; 16.30; 17.00; 17,30 Weekdays: 14.30; 15:10; 15.50; 16,30 Summer timetable: 15.30; 16.10; 16.50; 17,30   The tours are led by a monk, you do not need any reservation, both for individual users and for groups, free offer.