Asolo is often defined as one of the most evocative historical centres in Italy; Asolo is a known village for its architectural sights and is famous also for some characters who were fascinated by its originality. In fact Asolo welcomed several artists, poets, musicians, painters and even Queen Caterina Cornaro, who was elected the lady of Asolo by the Serenissima in 1489 following the forced conveyance of CiproIsland which she had inherited after her husband’s death. The new sovereign (1489-1509) set up a small court composed of characters coming from all over the region and 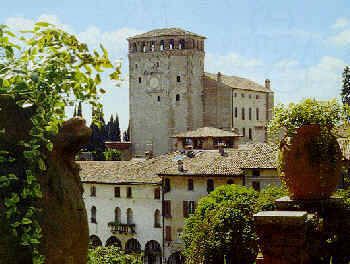 from Cipro too (among the most important ones we can remember Pietro Bembo, Tuzzio Costanzo, Lotto and perhaps Giorgione too) and she increased the renown of the town adding also a touch of nobility. At her death some centuries of decline followed but starting from the second half of the twentieth century the town has took on a great touristic importance for keeping, for a long time, many Venetian features; for this reason several monuments and urban areas were restored in the past and still at present are under repair. Anyway what fascinates most right from the start in Asolo, is the aristocratic atmosphere you can breathe through its alleys, in the squares and cafés. A brief walk soon leads you to the historical centre; Porta Loreggia let you go, from south, to the centre line, made of Browning road with palaces having refined windows with three lights; in one of these the English poet Robert Browning wrote ‘Asolando’, that is a collection of lyrics, and he coined, for the occasion, the verb ‘asolare’ which means going liberally for a walk an relaxing before the natural wonders. In Asolo all the historical centre deserves our attention, from its Cathedral (inside there are some paintings by Lorenzo Lotto, Jacopo Bassano and Lazzaro Bastiani), you can go down along the Captain Loggia, namely the ancient seat of the Asolo Community where there is the Civic Museum; forwards there is the Castle of the Queen, where Caterina Cornaro lived, with its medieval Clock Tower; from the cosy D’Annunzio Square we can go to the arcaded Canova road to see Duse’s house. THE ANTIQUE TRADE MARKET An appointment you cannot miss, as it fascinates many tourists as well as experts, is with no doubt the Antique trade Market; for more than twenty years it has been a ritual appointment for all the people fond of ancient objects. More than one hundred exhibitors from all over Italy display some of the most interesting antiques: furniture, jewels, silverware, prints and books, modern objects and articles in general.