Villa Widmann Foscari called the Malcontenta in Malcontenta The name of this villa and of its place probably derives from the discontent of the inhabitants who lived there and continually saw their lands flooded because of the cutting of Brenta made by the Paduan people, or mayby from an ancient legend dealing with the wife of a Foscari, who had been confined in the villa in order to expiate her marriage unfaithfulness. The villa was built by 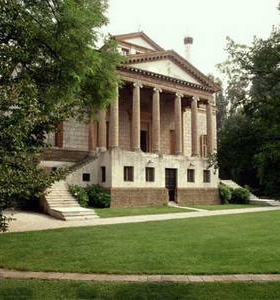 Palladio about in 1560 on behalf of Nicolò and Alvise Foscari and it is considered one of the jewels of late Venetian Baroque. Palladio himself describes it in his ‘Four books on architecture’ and it represents a particularly valuable oeuvre of the artist and architect. The villa was widely enlarged, till it reached the current form only in the middle of the eighteenth century when family Widmann, after buying the building, adjusted it following the French rococo trend which at that time was very popular. The central body acquired, then, a new aspect, as it became a pleasant residence for entertainements and parties, during which playing was added to music, food and dancing. The central hall was embellished by two artists who were much contended in Venetian surroundings, such as Giuseppe Angeli (1712-1798) who was a follower of Giambattista Piazzetta, and Gerolamo Mengozzi Colonna, an extraordinary painter who was the favourite collaborator of Tiepolo. The Barchesse of Villa Valmarana in Malcontenta The whole body of the villa was built in 1600s by the Valmarana and at its ends two structures in L shape were built: they both are characterized by a stately adorned frieze and an impressive colonnade. The building was taken over by the colonies in 1800s and they tranformed the left side barchessa into a farmhouse the one on the right into a tavern, while the villa was destroyed in 1890 in order not to pay the taxes on luxury houses. The guest-quarters, that is the only part open to tourists, represent the most interesting part as, in fact, still nowadays, they contain the original furniture and they are richly painted in fresco by Michelangelo Schiavoni (1712-1772) called the Chiozzotto. The frescoes which, in 1908 had been covered with lime in order to use the barchessa as a warehouse-stable and tavern, were recovered in 1962 thanks to the sculptor Luciano Minguzzi who, at that time, was the owner of the villa. On the ceiling of the central hall, inside a sky by Tiepolo we can find a representation of the Glory of family Valmarana; placed in an original context, among jests and rural work the figures of Diana, Marte , Apollo and Minerva are represented together with page-boys, noblewomen and common people who, magically coming out from the walls, watch the spectators from an imaginary balustrade. The lateral rooms contain the representation of liberal arts and landscapes pictured with a light and shade style. Villa Pisani in Stra It is an impressive and stately building and it can be regarded, with no doubt, as the queen of the villa of the riviera. 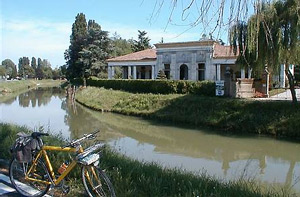 Villa Pisani represents the apex of the eighteenth century architecture in which the luxury of Baroque goes together with the harmony of Classicism like the sumptuous European royal palaces such as Versailles or Caserta. Thebuilding of the central body began in 1720 following the project by Gerolamo Frigimelica and to order of the noblemen Alvise and Almorò Pisani. When Frigimelica died, the task of erecting the great edifice was given to Francesco Maria Preti, a young architect whom we owe the present aspect of the villa. The inside of many of its 114 rooms, where there is still the original furniture, is richly adorned with statues, frescoes made by the greatest artists of the period such as Fabio Canal, Jacopo Guarana, Jacopo Amigoni, Andrea Urbani, Andrea Brustolon, Andrea Celesti, Gaspare Diziani and many others. The name standing out among the others is that of Gian Battista Tiepolo who, in the dance room, between 1760 and 1762, realized, with his irreplaceable collaborator Giovanni Mengozzi Colonna, one of the masterpieces of the Venetian eighteenth century that is the Glory of family Pisani. The huge park represents an autonomous world characterized by sculptured elements and several evocative constructions: the coffe-house, the esedra, the archaeological small hill, the ice-house, the lemon-tree garden and the stables which symmetrically double the central body. During its long story the villa has given hospitality to very known historical characters, from Napoleon, who became the owner in 1807, to Mussolini and Hitler who met here for the first time in 1934. It is here that Gabriele D’Annunzio found inspiration for the maze scene described in his novel ‘The Fire’.