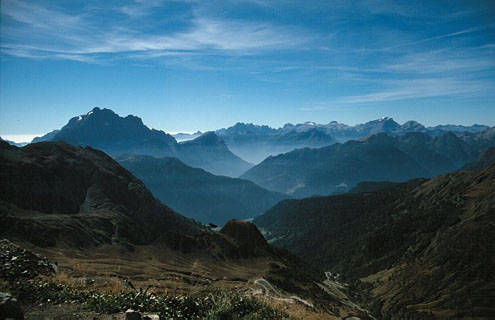 On winter time the tracks link the three valleys of the Ski District Civetta in an exciting carousel of slopes echoed by scenarios that leave the viewer breathless, and that are always perfectly groomed for those who enjoy steep slopes or for those who prefer to ski in peace. In addition, the Civetta District offers magnificent ski slopes lit and there are also cross-country trails illuminated. So 46 tracks are available for skiers, including 4 tough, 18 medium and 24 easy for a total of 82 km of slopes, mostly covered with artificial snow and between 1000 and 2050 meters. The ascent is guaranteed by 26 lifts, including three gondolas with automatic closing, 6 chair-lifts and 17 ski-lifts. Alleghe, Selva di Cadore, Zoldo and Palafavera are the main places of this District, united by ties of ancient traditions and customs. The hotels facilities are welcoming, family-run hotel equipped with the necessary amenities for an unforgettable holiday. The excellent local cuisine, rich of typical dishes, is combined with a warm atmosphere. The Civetta District is a very interesting ski area in Veneto. ALLEGHE As early as the twelfth century there was a large mountain community, so as to require a chapel for religious services of the whole area. The town of Alleghe, before the formation of the lake, was made up of a group of villages located in the valley floor and on the slope side of the Cordevole creek. The January 11, 1771 a huge landslide fell from Mount Spitz burying the whole valley. So the mountain landslide formed a natural dam from which took birth the picturesque lake of Alleghe. 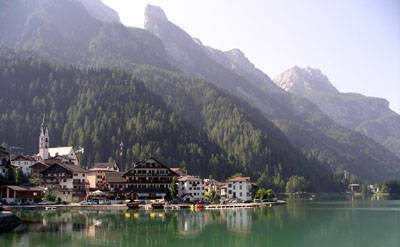 The mountains towering in the sky soon attracted hikers who went to conquer the unclimbed peaks of Civetta, Pelmo and Marmolada. Since the last century, in fact, along the shores of the lake arosed some hotels, just related to the history of a glorious sport: mountain climbing. Alleghe is a wonderful holiday destination for both nature lovers and for those skiing. ZOLDO ALTO E VAL ZOLDANA The area of Zoldo has been known since the thirteenth century as an important mining centre. The municipality of Zoldo Alto, which is today a well-known holiday resort in summer and winter situated in the upper valley having the same name, is formed by the nine villages of Brusadaz, Coi, Costa, Fusine (1177 m), Iral, Mareson Palafavera, Pecol (1338 m) and Pianaz. These small towns are located on both sides of the river Mae and surrounded by the majestic Civetta peaks. The lifts of the district of the valley, divided between Pecol and Palafavera, are linked with those of Alleghe and Selva di Cadore. Cross-country skiers have two tracks: "Mareson" and "Palafavera" long respectively 3 and 5 km. 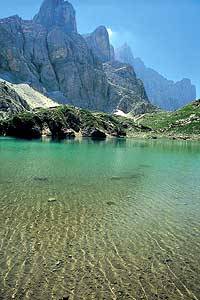 In summer, the valley turns into a fascinating destination for hiking at high altitudes, the Pelmo, Civetta or the Moiazza group. Among the many possible destinations, the ascent at the foot of Pelmetto allows you to see the footprints of dinosaurs, prehistoric animal footprints dating back 250 million years ago. Another important evidence of the prehistoric era is represented by the remains of the Mondeval Man, dating back to the Mesolithic and now preserved in the Civic Museum of Selva di Cadore. SELVA DI CADORE E LA VAL FIORENTINA Around year Thousand the Valley Fiorentina belonged to the “regolini” of San Vito, who created the first nucleus of what is now the village of Selva, in which Federico Barbarossa, emperor of the Holy Roman Empire gave the mines as feud. Iron was worked in Selva and Caprile, from where was sent to Belluno to make swords, and knives, or Forno di Zoldo to be turned into jugs and nails or the Boite valley. After the fall of the Venetian Republic the closure of the mines caused a remarkable phenomenon of emigration. The turning point for the country's economy occurred in the late 1970s when came into operation the ski-lifts and a chairlift, opened new hotels and facilities became part of the Civetta District. Tourism became from that time the main source of income. Val Fiorentina has been inhabited since ancient times as evidenced by the discovery of the skeleton of the Mondeval Man dating back to the late Mesolithic period (7300 years ago). Other finds date back to the late Neolithic and Eneolithic (late fourth millennium BC. - III millennium BC.). Throughout the year, the valley is a natural paradise for sport and relaxation: lakes where you can relax; endless variety of walks, mountain bike paths along roads and trails in the woods; the most famous and daring hiking and climbing excursions. Not to forget the cultural aspect of Selva di Cadore; There is, in fact, the opportunity to visit the Museum "Vittorino Cazzetta" which preserves the original skeleton of the Mondeval Man and various other archaeological finds among which we find flint points, and various vessels. This museum is divided into 3 parts: the archaeological section where you can find various archaeological findings, an historical section where you can admire a series of scrolls including border Roman inscriptions dated to the first century a.C. And a geo paleontological section where you can see the cast of 40 square meters with imprinted multiple sets of dinosaur footprints, made from a layer of Pelmetto. The Valley is also crossed by the Alta Via No. 1, the famous Italian mountain climbing route: between the beautiful landscapes you can spend full days completely immersed in nature, accompanied only by your backpack and the homely hospitality of the mountain huts.