The San Pellegrino pass is a wide alpine passing of tourist interest, with exclusive hotels that allow a direct access to the tracks, ideal destination for those who love the most absolute ski and the tracks always warmed up by the sun. A unique landscape, once-off, that waits just to be known. It's just 11km from Moena and sings the border between Trentino and Belluno. Destination in summer of many excursions, both on the Costabella side and Gruppo of Monzoni or toward the area of Col Margherita and of Cima Bocche, with interesting trails dating back to the First World War. During winter time the ski area that here develops is equipped with modern lifts and tracks of different length and difficulty , directly linked at the carousel of the Tre Valli and the ski zone of Falcade. 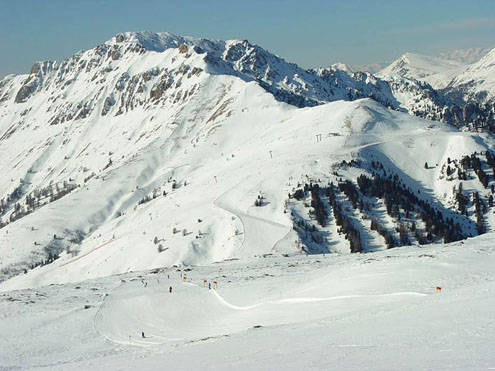 The Pass is characterized by some prestigious hotel facilities, that allow a direct access to the tracks ideal destination for those who love the most absolute ski and the tracks always illuminated by the sun. By Nordic skiers is well known the centre of Nordic ski Alochet , with beautiful paths surrounded by the splendour of the woods. The ski area Tre Valli comprehends San Pellegrino, Moena-Alpe Lusia and Falcade. It's possible to go from Falcade to San Pellegrino skying or by foot, instead to reach Moena and Lusia there is a bus. In the ski area there are 100km of tracks and 27 lifts between 1200 and 2500 meters, among beautiful scenery and snow-covered slopes. There is a signposted route, the ski tour of love that connects all three valleys. The ski area is equipped with modern lifts. A cable-way with 100 seats takes to Col Margherita at an altitude of 2650m. Famous the “big-track” with 646m of altitude gap, long 3200m and occasionally very challenging, with inclines between 10 and 45%. From Col Margherita it's reachable Falcade, or there is the possibility to ski through the numerous medium-easy tracks located in Le Buse. On the opposite slope of the pass there's the departure point of many lifts and chair-lifts. With two chair-lifts is reached Cima Uomo at an altitude of 2469m, to return to the pass down the slopes Cima Uomo, Gigante and Chiesetta, with varying difficulty for a total of 3300m with a vertical drop of 483m. With the chair-lift Costabella and the lift Paradiso are reached 2318m. The track is 3300 meters long and is of medium difficulty, with gradients of up to 35%. The longest track of the Ski Area (12km) was called "trail of Love" for his smooth track and the romantic view. Now there is even a love Ski tour that starts and finishes in Falcade. MOENA 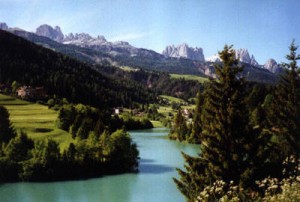 Moena is located on a beautiful alluvial basin surrounded by some of the most beautiful Dolomite groups, including the Latemar, Valaccia and the green offshoots of the Costalunga passing. Is the biggest town in Val di Fassa, known both in Italy and abroad like "the fair of Dolomites”, incorporating completely the charm and ancient splendour that is linked to tales lost in the mists of time. The village, very nice from an architectural standpoint, is distinguished by the eye-catching elegance that goes with refined shops where there's the opportunity to satisfy even the most demanding desire for classy shopping. In addition, Moena has proven in recent years its sensitivity to the Ladin culinary tradition, hosting gastronomic events such as "Dinner with King Laurino" in winter and "Flavors of Fall" in September. During summer time the village offers to its guests the chance to make many walks and trails of varying difficulty to do on a mountain bike. It is now home of the “bikers” and right on its territory, leads the trail the "Rampilonga", which with its 4500 participants has become the largest Italian bike marathon. In winter, Moena beats in the heart of the Tre Valli ski area, characterized by a functional network of ski lifts and slopes both in Alpe di Lusia and Passo San Pellegrino, as well as a fully equipped centre for fund. FALCADE 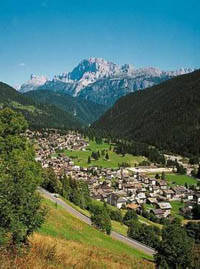 Falcade is located in the Tre Valli along with San Pellegrino pass, Moena and Lusia. There is a signposted route, the skitour of love that connects all the three valleys. The connection with San Pellegrino is possible on ski while for reaching Lusia and Moena there's the need to take the bus. In the district there are 100km of tracks and 27 lifts. But let's go back to Falcade. From the village the chairlift Le Buse arrives at a height from where it's possible to climb up to 2500m above Col Margherita. From here you can decide to go down the slopes or go down toward the Passo San Pellegrino. Among the tracks on the Veneto side should be remembered the long trail of lovers which from 2500m reaches the village after 12km. The plant are fast, modern and the slopes are panoramic. Falcade provides the opportunity for Nordic skiers to practice this sport in the woods and the wide open spaces surrounding the town. There is the opportunity to choose between the different available routes from the ski school, where beginners can learn the basic techniques with the help of the teachers of Nordic ski. You can ski up to the other side of the Biois creek, in order to face the significant differences in height and the technical and athletic difficulties of the red route. In Nordic Ski Centre Falcade there are four rings: two red 7.5 and 4km and two blues of 3 and 2km.   CANAZEI Canazei, with its four fractions of Gries, Canazei, Alba and Penia, while not being the largest population centre in Val di Fassa is definitely the most well-known tourist centre and major attraction for winter tourism both nationally and internationally, thanks to its strategic location close to the Dolomite passes Pordoi, Sella and Fedaia. The modern ski lifts make the area of Canazei a model resort in the Alps, directly connected to the Sellaronda tour. Situated in a beautiful natural valley next some of the most beautiful peaks of the Dolomites, Canazei has experienced in the last decades, a significant building expansion, while remaining firmly tied to its Ladin origins and traditions, many of which are still visible in the architecture as well as in folk customs. Great attention is paid to the protection and care of the habits and customs of the Ladin people that here and elsewhere gather in groups of dance, theater and culture. At the end of each summer in Canazei the representatives of all Ladin nations round up for the "Great Feast of Summer(Istà)" ,that has become a classic appointment of the local tradition. Canazei represents an ideal combination of nature and sports, events and culture, relaxation and nightlife;there are in fact a lot of the cafes, pubs, après ski, piano bar, frequented especially in winter until the first light of dawn.