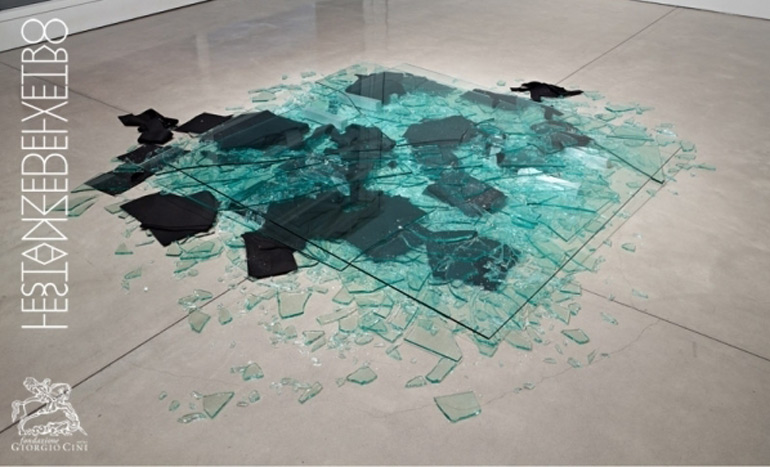 After the incredible success of the exhibition dedicated to "Carlo Scarpa Venini", visited by more than 46,000 people, the Cini Foundation continues with its "The rooms of glass" project, designed with the objective of enhancing twentieth century glass art with two new major exhibition events: the first will be "Fragile?" by Mario Codognato, starting on 8 April 2013, while in late summer there will be an exhibition dedicated to the creations of renowned artist Napoleone Martinuzzi for the Venini glassworks between 1925 and 1932. The exhibition "FRAGILE?" will feature more than 30 artworks by some of the most interesting international artists of our time who have experimented with industrial and found glass – from MarcelDuchamp and Joseph Beuys, to Ai Weiwei, Damien Hirst, Giovanni Anselmo and Jannis Kounellis, to name a few. This exhibition is part of Le Stanze del Vetro project, a joint collaboration between Fondazione Giorgio Cini and Pentagram Stiftung, developed with the aim of promoting the appreciation of and research in glass made in the 19th and 20th centuries. The exhibition will be open until 28 July 2013. In the context of Venetian glassmaking and its peculiar artisan connotations, "Fragile?" aims at taking a different, yet equally important, aspect into account, namely the use of glass as a found object, with specific metaphorical and linguistic features. "Fragile?" displays the creations of some of the most interesting artists of our time, who used glass with diverse and contrasting intentions: from the provoking gesture of Marcel Duchamp of shutting the air of Paris in a transparent ampoule, to the tragic lyricism of Joseph Beuys’s  glass fragments as a witness to the ferociousness of earthquakes, from the transformation of industrial objects into poetical individualities by Luciano Fabro to the ironic explosion of car windscreens in a Pipilotti Rist video. Seen as a whole, the works and artists exhibited in "Fragile?" translate the infinite potentialities of glass into unprecedented dialectics which inevitably have to do with our daily existence, as a constitutive element of contemporary artistic language. "Fragile?" will gather works by, among others: Michael Craig-Martin, Ceal Floyer, Carsten Nicolai, Lawrence Weiner, Monica Bonvicini, Keith Sonnier, Giuseppe Penone, Rachel Whiteread, Luciano Fabro, Mona Hatoum, David Hammons, Claire Fontaine, Cyril de Commarque, Barry le Va, Joseph Kosuth.