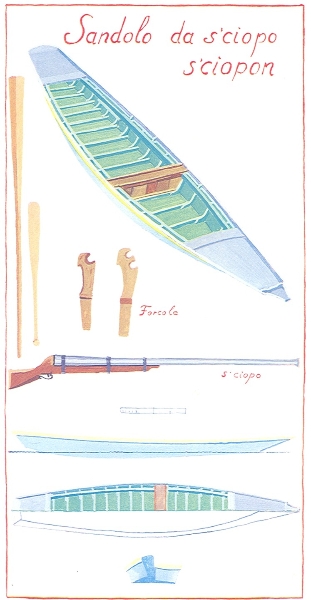 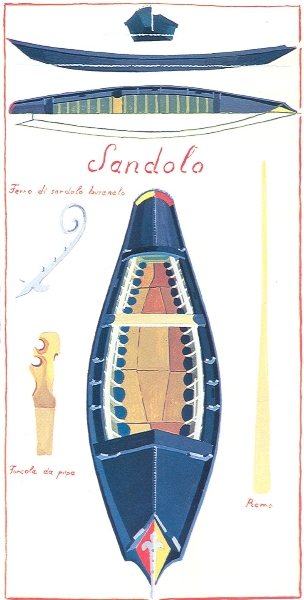 Venetian Punting is an unusual rowing technique that is unique to the Venetian lagoon. It dates back to ancient times and came about due to the hydrogeological conditions of the lagoon itself, characterised by its low waters and narrow channels. To avoid running aground in low waters, it was, and remains, necessary to row standing up in flat-bottomed, keel-less boats that are light enough to be rowed even by a single rower, sometimes with the aid of a sail in the trapezoidal form typical of the region. This is how Venetian vessels gained their unusual characteristics. The most common, after the traditional gondola is the Sandalo (also known as the Sandolo), an asymmetric boat of length varying from seven to ten metres that can be easily guided by a single rower. Then there are the S'ciopon, which derives its name from the fact that it was primarily used for hunting in the Lagoon – “s'ciopon” is the name of the rifle); the Sanpierota, a shorter, broader vessel, was originally used mainly for fishing; the Caorlina type is seen frequently in the regattas, and finally, the Topo (literally “mouse”), which was the largest vessel and used mainly for transporting cargo. From 1975, the year in which the first Vogalonga (“long row”) took place, one of the most important rowing event in the lagoon of Venice, led to the revival of rowing societies. Today, the city boasts over thirty, of all sizes. Visit one of these societies if you want to try the thrill of learning this unique rowing technique and see Venice from her magnificent canals. Most of these rowing societies will also hire out boats for tours and excursions in the lagoon, or during major events like the Redentore (“Redeemer”).