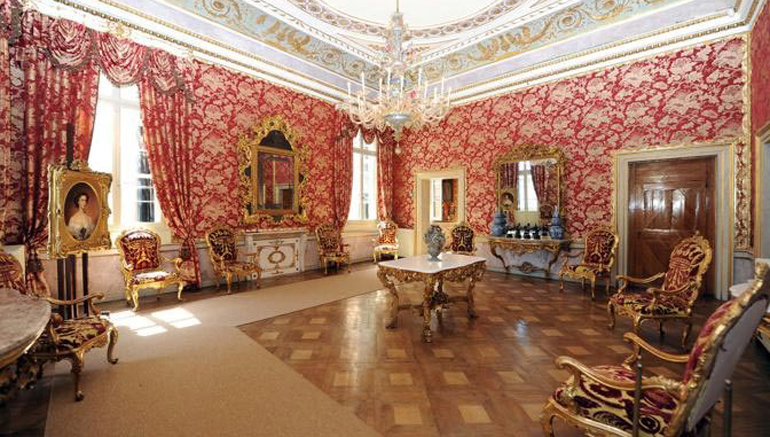 Sissi’s myth is commemorated in Venice with the inauguration and the opening to the public of the rooms reserved to the Princess Sissi in the Imperial Apartments of the Royal Palace in Venice, in S. Mark’s Square, after a restoration of nine estraordinary spaces. Princess Sissi sojourned for 38 days in the Imperial Apartments in the Royal Palace, in occasion of her first visit in Venice in 1856, the visit recalled in the fourth episode of the famous film by Ernest Mirischka. Then, Elisabeth chose Venice to live after the death of her daughter Sofia, between October 1861 and May 1862. The nine rooms now opened to the public, give back to light decorations by Giuseppe Borsato, ornamentations by Giovanni Rossi, golden stuccos. New tapestries have been collocated in the rooms, close to the original ones, expressly realized and donated by Rubelli – Venice. To recall the original atmosphere, precious fittings dated to the Napoleonic period and in Imperial style have been collocated in the Apartments. Come back to life the Empress’ Audience Room and the Studio, the Empress’ bedroom with its delightful boudoir and the Antechamber. The Empress’s Bathroom is personalized by a decoration representing “The Goddess protecting the Arts“, with a face recalling the beautiful Empress. Also, of great impact for richness of decorations, tapestries and furnishings, the “public” spaces,as the Dining -room for week-day launches,the Lombardy-Venetia Throne Room and the Oval Room. Opening Hours from April 1st to October 31st 10 am – 7 pm (ticket office 10 am – 6 pm) from November 1st to March 31st 10 am – 5 pm (ticket office 10 am – 4 pm)